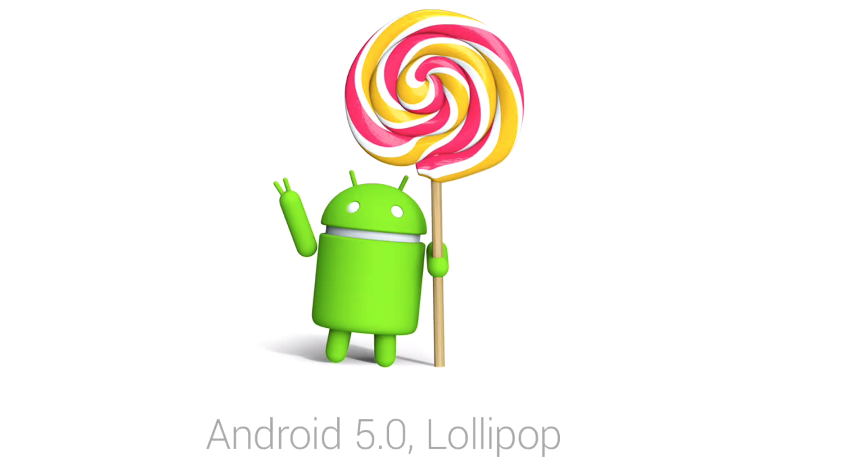 Google is back with the lattes version of Android operating system, this new version of android is named Android lollipop, it also known as Android 5.0,Google has been constantly working to make its operating system more Dynamic and User friendly.

Since the preview, Google has added lots of new features to the final release of the latest Android version. On October 15, Android 5.0 Lollipop was launched on devices like Nexus 6, Nexus 9 and Nexus Player since then it gain huge popularity.

Android Lollipop comes with lots of new features . Let’s look at its top 10 features.
Google’s last design language was Holo, which was replaced by Material Design,

Material Design is implemented to make the the menu respond more promptly and smoothly .Google has been continuously updating its design guidelines for developers to start making Material Design apps with more user friendly interface. With Lollipop, Google is focusing on the main thing – Android’s consistency across all devices. Android Lollipop will be available across phones, tablets, watches, cars and TVs too. Lollipop will have a flat look for its UI and all the icons.So Android Lollipop will have best 3D interface along with a consistent design,with this new design elements can dynamically shrink and expand.
Android 5.0 comes with a feature which allow encryption, by default. Now user can encrypt the Android device even now. For this user need to plug in your phone and the encryption process takes a minimum of 30 minutes. And just to warn you, if anything  goes wrong, your data will be lost. But with Android 5.0, encryption will be automatic. Android 5.0 features an opt-in kill-switch known as ‘Factory Reset Protection’ which allows users to wipe out the device’s data, if hey wish to. With this Android version, you can also unlock your phone in an easier way without entering a PIN or drawing the pattern. You can use roximity. Android lollipop also comes with SELinux enforcement, which means better protection against viruses and malware.


Android 5.0 Lollipop comes with new lock-screen displays and rich notification settings. now the users can view and respond to messages directly from the locked screen itself , and the richer notification settings in the new Android version include floating descriptive notifications on the top of activities. These notifications can be viewed or dismissed without moving away from any activity. Android Lollipop comes with better control over notifications. Users can control notifications from apps and the sensitive content can be kept hidden from notification.Android Lollipop also comes with feature called the‘Do Not Disturb’ mode, just like in Apple’s iOS, which allows users to selectively silence notifications and calls
The entire look and feel of the notifications is changing as lock-screen can be easily accessed now, along with a revamped pull-down menu. The layout and location of the notifications have been completely hanged and lock-screen widgets have been removed from Android 5.0.
low battery backup was one of the major drawback in the previous versions of android. This is because the OS runs a lot of process  in the background causing the battery to quickly drain,Therefore Android Lollipop comes with a new battery saver feature, which claims to extend the battery life of devices up to 90 minutes.This Android version will display the estimated time left to fully charge the device when plugged in and also the time left before the user needs to recharge the device.
The power saving mode has been made more reliable and efficient in Android 5.0 Lollipop,Now the user will be able to restrict syncing, background data and also Customize screen brightness to extend battery life.
Google wants to curb swipes on devices that are needed to access important functions like Wi-Fi, Bluetooth and GPS activation. The new Android includes built-in tools for the flashlight, hotspot and screen cast controls, which means you can get rid of many third party apps now. Setting up an Android device will become faster with Android 5.0, as the new device can be set up just by tapping it on the old device, though this requires NFC support.
All apps from Google Play will be transferred to the new device, if the same Google account is used. In certain situations, you can also adjust brightness, manually.
Android 5.0 supports 64-bit and the new Nexus 9 also features a 64-bit chip, though Nexus 6 doesn’t. Well, this kind of performance boost will not make a very huge difference for average users but Google will be shipping native 64- bit versions of Gmail, Maps and other apps too. But this development will not mean much if you are using a 32-bit device. The runtime environment in the new Android version is ART, which promises four times better performance and better desktop level graphics performance too.
The updated camera settings support advanced features like burst mode and fine-settings tuning. Full resolution frames around 30fps can be captured in this new update and shooting can be done in raw formats like YUV and Bayer RAW. Professional features have also been added like controlling settings for the sensor, lens and a flash, per individual frame.  Android 5.0 also supports UHD 4K video playback, tunnelled video for high quality video playback on Android TV and improved live streaming .In Android 5.0, developers will be able to implement their own technology to take full advantage of hardware and any mediocre camera can be transformed to a better one.

There is a new messenger app in Android 5.0, which comes with Nexus 6 and is said to be a simplified version of Google Hangouts. This messenger has been designed for sending and receiving SMS and MMS messages on Android in a quicker and easier way. More updates about this messenger are still awaited though.
Device sharing features have been integrated in Android 5.0, which allow users to share their device with family members and friends without giving access to sensitive content. It also features a guest user mode with custom options for access, which allows users to fix the place of the screen that is displayed.
There is also a feature in Lollipop that allows users to log in to another Android phone to access synced messages and content, if the device is forgotten at home.
There are some more features in this OS besides other fixes and improvements. In this new OS, finding things will become easier with improved search indexing, and search results will be saved across different apps and devices. Other relevant features of Android 5.0 include improved hardware keyboard accessory support, support for 15 new languages including Bengali, Kannada, Malayalam, Marathi, Tamil and Telugu, improved audio and video capabilities, and improved Internet connectivity with more powerful Bluetooth low energy capabilities.

Source: open source for you (magazine)